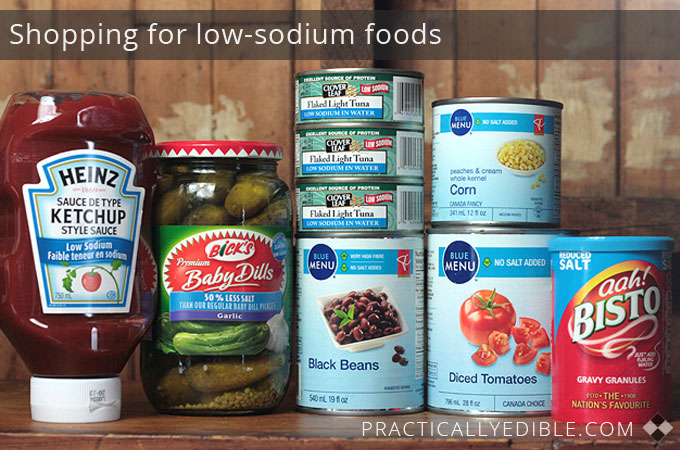 In the spring of 2013, I began the hunt for low-sodium processed foods to purchase.

And yes, I agree. It’s crazy if “normal sodium” has to be called “low sodium”, but that just goes to show you how bad things have got.1

And yes, I know the obvious suggestion — make everything yourself from scratch. But I have to work for a living; I can’t spend every waking hour in the kitchen, nor would I want to. I like buying many ready-made food products because they are convenient and because they are often better and cheaper than what I could make. And so the hunt began.

Note that when if you look for “sodium-free” food, you probably aren’t going to find it. That’s because just about everything, even water, has naturally occurring sodium in it.2 So they can’t say sodium-free — you’re going to see “low-sodium”, “lower-sodium”, “reduced salt” and “no salt added.” Those are the code phrases you’ll be looking for. In your mind, you can translate it as “we cut back how much we monkey with it, so the salt is closer to what it should be.”

The working guidelines I established for myself

None of this is meant to be or replace medical advice. If you have any health issues that salt might impact, you need to consult your physician and follow their advice, though some of this information may be useful to them in formulating practical daily dietary advice for you.

Well. I quickly learned to pronounce mg as “meg” as in “megaton bombs”, because so many of my go-to processed foods, from preserves to jams to sauces to soups to tinned and even frozen veg, were turning out to be sodium bombs.

By dint of decades of soothing marketing about their healthful, nourishing products, many food manufacturers (such as Campbell’s, Green Giant, Birdseye, etc) have built up our trust for the various ready-made meals and pantry-shelf food products that we buy from them. And boy have they collectively blown that trust on the salt front anyway, feeding us a near-toxic level of salt each day.

For instance, and not to pick on any one, but there’s 160 mg of sodium in Heinz ketchup. In just 1 tablespoon of the stuff, that is. Squirt 4 tablespoons of ketchup on the side of your plate at breakfast (which is easy to do for ketchup fans), and boom, there’s over one-third (640 mg out of 1500 mg) of your sodium allowance taken care of for the day before you even start your second coffee, never mind reach for the actual salt shaker. H.J. Heinz, who built his entire business around fighting against adjuncts in food and for food safety, would have a bird over what they’ve done to his stuff, and probably knock a few heads around.

My approach to low-sodium food shopping

I decided to adapt a sort of Weight Watchers philosophy to sodium: look for better “buys” with your daily allowance when possible and, when not possible, enjoy mindfully in moderation.

In my mind, I proceeded to categorize the processed foods I buy in the following ways:

1. Can I make it myself salt-free with acceptable effort, time and cost?

In this category fell stuff like dried beans. Now that I’m a pressure-cooking convert, I know that I can cook up a batch of black beans from dried, no need to soak first, in 25 minutes flat AND with better taste and texture than canned and cheaper than canned AND salt-free… so cooking up beans from dried has become my standard, particularly because that cooking time uses hardly any cooking fuel in a pressure cooker and doesn’t involve any active time from me. That being said, is there an emergency can or two of black beans still on the pantry shelf? You bet your sweet bippy, and there always will be (but it’s a low sodium version — read on.)

2. Is the added sodium in the product absolutely vital to the product?

Soy sauce is an example of this. It’s a bugger, apparently, to try to make it without salt because salt is crucial to controlling the microbial process that must take place. That being said, they have now developed a filtration process to filter some of the sodium out afterwards. So while salt is needed for the product, and it can’t be eliminated entirely, it can be reduced. Kikoman Soy Sauce with the green label is an example of this. It has 580 mg of sodium, compared to regular Kikoman with 920 mg. That’s about 40% less for a difference that I can’t taste. Done.

3. Are lower or sodium free alternatives available that don’t affect the nature of the product at all?

No salt added canned goods are not only healthier for us, but just as importantly (I say this as a cook), it puts us as cooks back in control of the seasoning that happens in the kitchen. Because, hey, I might just have opened a can of already prepped, cooked, and ready to eat food, but by seasoning it, baby, I’m making it all my own creation.

4. Can I get a hold of a lower-sodium product without huge shipping costs or traipsing all over the city?

Call me cheap, or call me lazy, but I’m not willing to spend disproportionate amounts of money on shipping, nor am I willing to give up hours of my life weekly plodding all over hell’s half-acre to obscure suburban strip malls. What constitutes a realistic shipping cost for a special food item is I suppose a separate topic for another day.

5. Is there no alternative and it’s just something to be approached with moderation.

Example: Thai fish sauce. Currently (March 2014) I’ve yet to find a lower-sodium version of it. But it adds a ton of flavour to dishes without adding any calories, so with it you can cut back on other flavour cheats like sugar or oil. So, I felt that it’s worth using in moderate amounts because it has a positive influence on the overall healthfulness of a dish particularly if the fish sauce is the only salty item going into that dish.7

Example: Gourmet table salts such as Maldon Salt or Fleur de Sel. When sprinkled on top of food on the plate, the flavour and texture are so distinct and satisfying that I feel that you notice and enjoy the sheer saltiness of them far more than you would salt buried (aka wasted) within a recipe.

Example: a nice, single-serving salty bag of chips (aka crisps.) Cause. Just because, once in a blue moon, you just want a salt high.

How I tackled the hunt for low-sodium foods

Having thought and researched all this out, I got to finally push my arse away from the desk and swing into action. And I have to say, actually getting out into the field and starting the hunt stage was easier, and way more fun, than the mental gymnastics I had to go through above so I hope that having recorded them will save you some mental wear and tear.

And remember, in this contest, the high numbers are the losing numbers; it’s the low numbers that win.

I made a chart in a spreadsheet, like the one below, to track and compare sodium values of canned goods. You could do it on paper, or in a table in a word processor or spreadsheet up in something like Google docs, etc. When I first started filling in the table, the first stop was an easy one: the kitchen pantry, just spinning around the canned and bottled goods there to review the labels. I’d recommend you start there, too.

After that, I would take pen and scrap paper to the grocery stores, and just stand there comparing, say, cans of corn until I found a winner at that store. You feel dumb at first, and at first I worried they would think I was a “competitive price checker” working for another store or something, but I just decided that if I was confronted I would simply tell them what I was looking for and *then* since they’d spoken up, put them to work helping me assemble my numbers on their products (which I’m sure they’d loathe taking the time to do.)

Sadly, as you can see, some of the old, trusted household brands such as Green Giant and Del Monte are the big losers (even their versions of low-sodium products still don’t even rate.) Though I also want to briefly point out to people who do their shopping at health food stores that some of the brands sold there can be terrible in sodium levels, too — don’t take it for granted just because they’re being sold in a health food store with incense burning, flip the label around and see.

I could have used Google to do some of my research, as nutrition values are becoming more common now on manufacturer web sites, but I was more interested in what the winners amongst the stock that stores I actually went to carried.

Once you know what your winning products are, then you can start shopping for them by price again at various stores. But it’s a very different form of shopping, I’ll admit: instead of your first criterion being the price number, it’s the sodium number, and then you look for the best price to get that number.

The good news is, though — that:

So, you’re paying the same or less for products that taste the same, but you’re getting more — you’re getting higher quality because the products are healthier. What’s not to like?

Remember that you are comparing the quantities of sodium to a daily recommended amount of 1500 mg (1.5 g).

If you see .01 g of sodium listed and you want the amount in mg, in your mind you can move the decimal point two places to the right. In this case, .01g equals 10 mg.

If you see 10 mg of sodium listed and you want the amount in g, in your mind you can move the decimal point two places to the left. In this case, 10 mg equals .01 g.