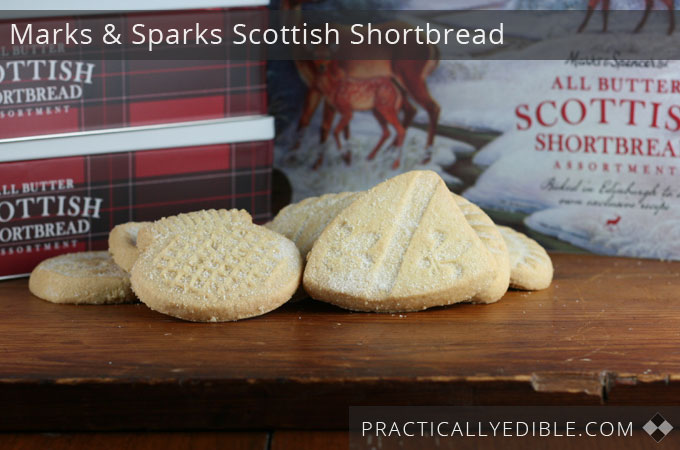 Christmas 2013 is the second Christmas I’ve enjoyed these shortbreads from Marks & Spencer.  They are hands down perhaps the best shortbread I’ve had. Not sweet at all, really rich and buttery, and with that perfect crumbly, “sandy” texture that good shortbread must have. (Not sure exactly what shortbread is? )

You’ll notice I’ve been very careful not to refer to shortbread as a cookie. Scots would be as scandalized by that as they would by the American predilection for tossing chocolate chips in. Mind you, some purists apparently wouldn’t approve either of the ingredients in these particular shortbread:

Purists, apparently, will admit to a shortbread recipe only flour, butter and sugar in a ratio of 6, 4, and 2 (e.g. 6 oz flour, 4 oz butter, 2 oz sugar.) The cornflour (aka cornstarch to North Americans) and rice flour would be verboten. Apparently their purpose is to add a bit more crispness. I’m with Marks & Sparks on this; the two additions are working for me.

These shortbread are branded “All Butter Scottish Shortbread”; the ingredients say 34% butter. I’m assuming what the two statements together mean is that 1/3 the weight of the ingredients was butter, and that that butter was all butter, with no margarine or other cooking fat mixed in. If you don’t believe them, just taste one.

If the taste doesn’t convince you of the very high butter content, maybe the calories will: there’s 140 calories (4 Weight Watchers PointsPlus®) per shortbread.  (The good news is, only 70 mg of sodium per shortbread.) 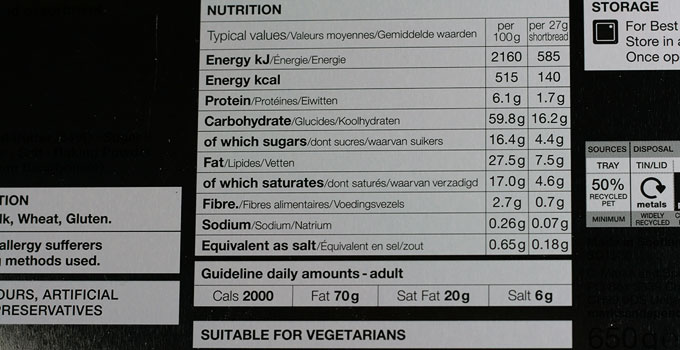 I enjoy them regularly by carefully sawing one in half with a serrated knife, and have half (for 2 ww points) with a bowl of fat-free yoghurt and fresh fruit. You can nibble on it on the side, or, crumble the shortbread over top the yoghurt and fruit. It makes for a filling, satisfying and low-work dessert.

I’ve got six tins stored up now on a cool basement shelf to last throughout the coming year of 2014.

The shortbread are apparently made for them in Edinburgh, Scotland, possibly by Burton’s Foods. [1. “Burton’s Foods is the world’s largest producer of shortbread and supplies own label seasonal shortbread to all the major grocery multiples from its Edinburgh factory, and has just added Marks and Spencer to its retailer list.” — Carmichael, Mary. “Bites to savour: Scotland’s sweet biscuits already have a great reputation but the suppliers are not sitting on their laurels, with lively NPD leading to savoury offerings. (Scottish Baked Goods)”. Grocer Magazine: William Reed Ltd. 20 July 2002. Accessed 17 March 2014. http://www.thefreelibrary.com/Bites to savour: Scotland’s sweet biscuits already have a great…-a090100720. ]

There’s 24 shortbreads in the tin; 6 different shapes with 4 of each shape. 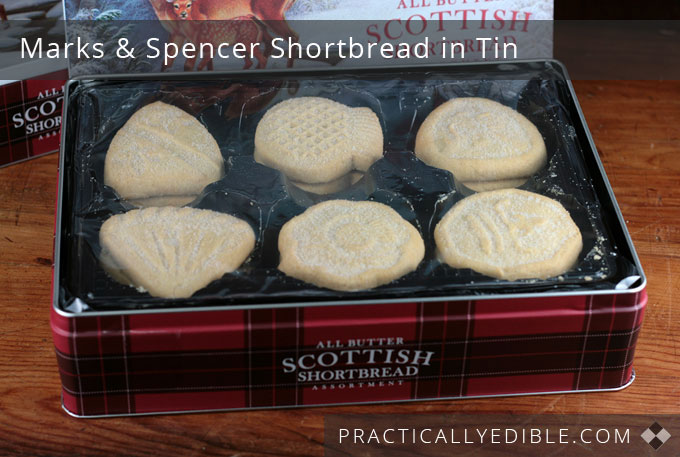 Notice that a few of the shapes recall the “Auld Alliance” between Scotland and France, with the royal Scottish thistle and the royal French fleur-de-lis.

The tins look like real collectibles. The front is like a watercolour painting; the back has a sort of hallmark on it even, showing the shapes of the shortbreads within. 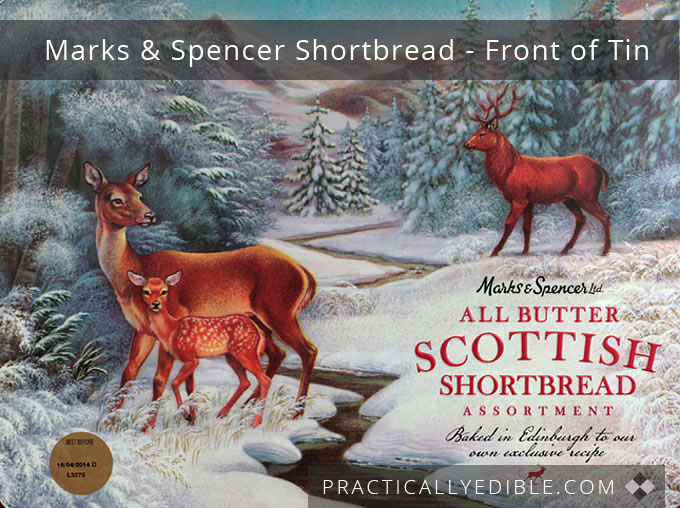 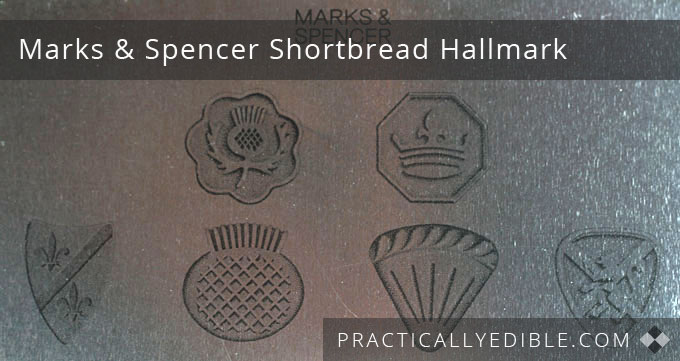 Marks and Spencer Scottish Shortbread back of tin

The tins are such high quality in their material, design and execution that they will likely be a collector’s item one day, but I’ll have so many empty ones of these, that even though I hate to throw them out, you can’t keep everything, and people just don’t seem to value these types of tins the way our grandmothers used to.

In the UK, these shortbread are available at Marks & Sparks stores. I get mine at a British import store in Toronto, Canada. They are only sold in the lead-up to Christmas, then bye-bye for the rest of the year.