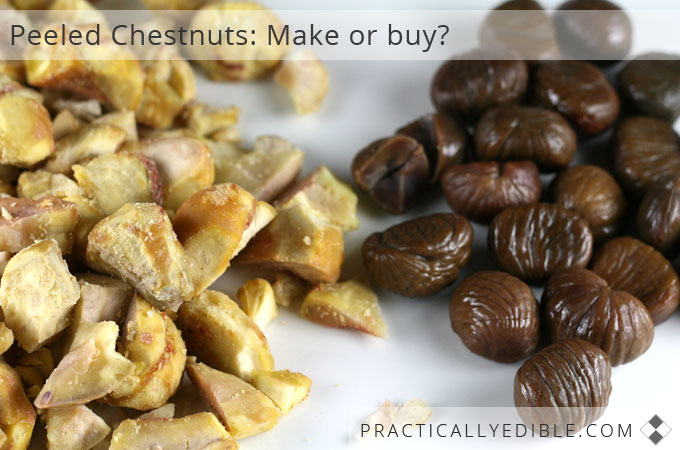 I needed peeled chestnuts for a batch of pickled chestnuts I wanted to make. So I needed them whole, as opposed to a tin of chestnut purée; you don’t pickle chestnut gloop. I know you can buy peeled chestnuts canned in brine, but I wanted to do my own pickling. And with the advent of November, the green grocers’ display stands on the sidewalks were beguiling, offering mesh bags of chestnuts between the Brussels sprouts, the cabbages and the bunches of kale, good fall fare all of them that any cook should be able to tackle. Huh.

For me, there are two take-aways from this comparison of make versus buy peeled chestnuts.

I had cooked chestnuts a few times in the distant past, but it was a long time ago, long enough I guess for me to have blotted the trauma from my mind. It’s all come flooding back now, as friends helped me remember that I’d passed the roasted chestnuts to them at parties and got them to peel them while I cannily found something else to do. 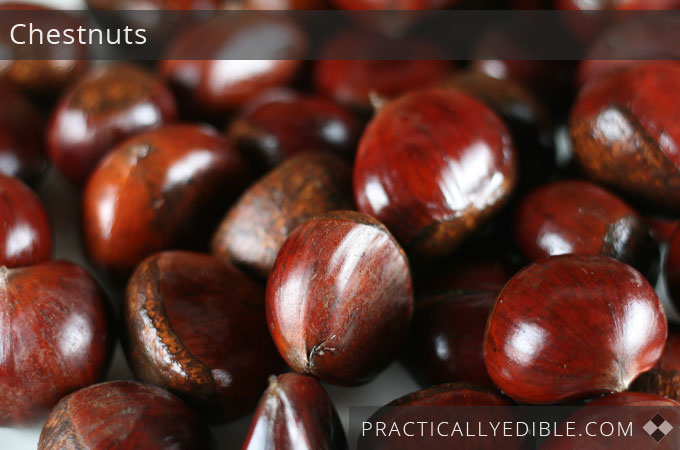 In any event, fast forward to fall 2014. The Internet is full of the prolonged and mournful cries of people begging for an easy way to peel chestnuts. Several people pointed to pressure cooking them as the no-fail way for easy-peel chestnuts. They said the pressurized steam just made the skins and shells slip right off. Being a recent and still enthusiastic pressure-cooking convert, I had those puppies in the pressure cooker before you could say Jack Robinson. 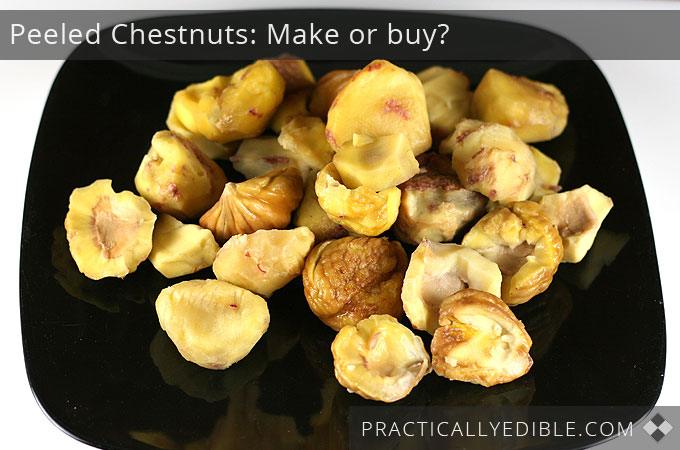 The “cheat” picture. Trying to make the results look good. And even that, ain’t so great.

Above is the “cheat” picture of the pressure cooked results. 27-ish relatively intact pieces of chestnut. But they’re not that great — patches of bitter inner skin are still on them. And largish chunks constitute only about 1/4 ( 250 g / 8 oz)  of the 1 kg (2 pounds) of raw chestnuts I started with. And the process took about 2 hours all in, during which I hated my life and was screaming inside with frustration. 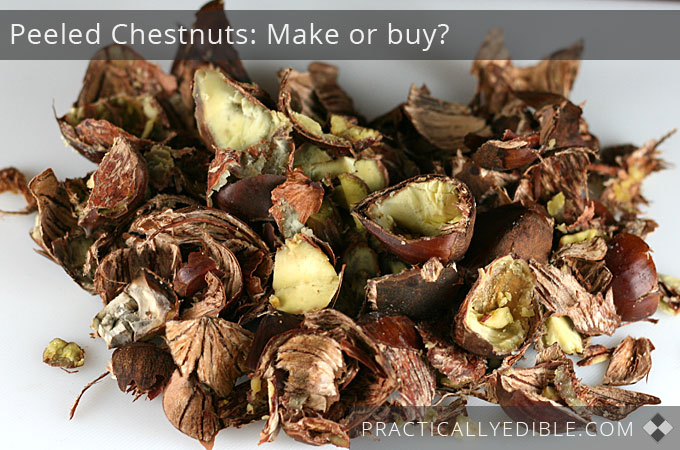 The carnage. Chestnut shells with loads of chestnut still stuck in them.

Above is a far more honest picture of the results, showing some of the discards. Tons of chestnut meat wasted because it was stuck in, and would only shatter upon being picked out, and I was fed up with the whole business. The shards of thin inner skin (which must come off because while edible, it is so bitter that you don’t want to eat it) show that the skin did not just magically come away with the outer shell, as the pressure cooking promises had me believe. I had to pry off the shell, and then take a paring knife and cut off the skin on each and every one. And I hate peeling anything with a passion to begin with: peeling is one of those thankless jobs that, if you’ve done it right, no one knows you did it. Get it wrong and you never hear the end of it.

And, here we go again…..less than one week later

So, that should have been enough to mark as “lesson learned”, right? Vague memories of a horrible process from the distant past, reinforced by recent experience to go “nope, you weren’t imagining it, it’s a miserable task.” You’d think, huh?

I chatted with people about it on Facebook, and they all suggested buying the chestnuts ready peeled. And I guess Google picked up on my recent searches on the topic, because I got a recommendation to watch a chestnut peeling video on Youtube. The video was “Peeling chestnuts, not fingers”, by Philip Rutter.  It seemed so simple in his video that I decided to give peeling chestnuts one more go.

In Mr Rutter’s method you chop the chestnuts in half, parboil them for about 3 minutes, then use a pair of pliers to easily pop the chestnut meat out free of shell and inner skin in a trice.

Here is his video above, if you want to watch it. 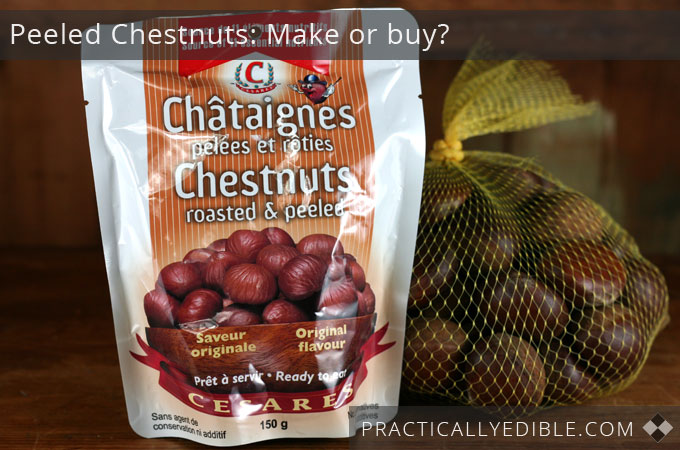 I decided at the same time that I would do a cost comparison with buying already-peeled chestnuts. So I got both. I bought from a store with very high turnover of their produce.

In the comments on the video, I saw some people saying that it didn’t work for them, with Mr Rutter replying that it could have been because the chestnuts were dry, and might have benefited from soaking overnight first, so I decided ahead of time to head that concern off at the pass and soak them overnight. 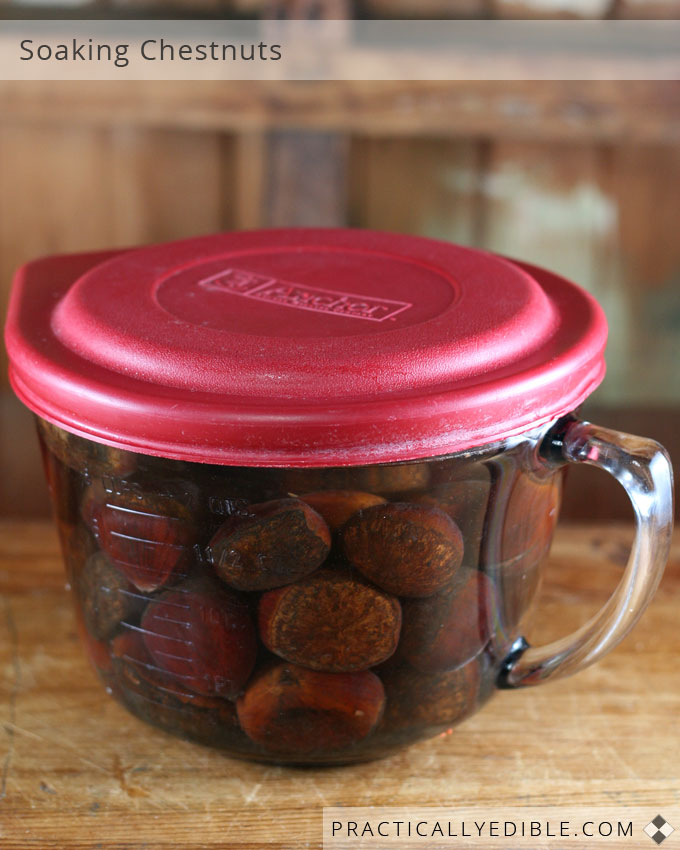 So with the soaking overnight done the next step was to cut them in half. This was easy work with a French knife. 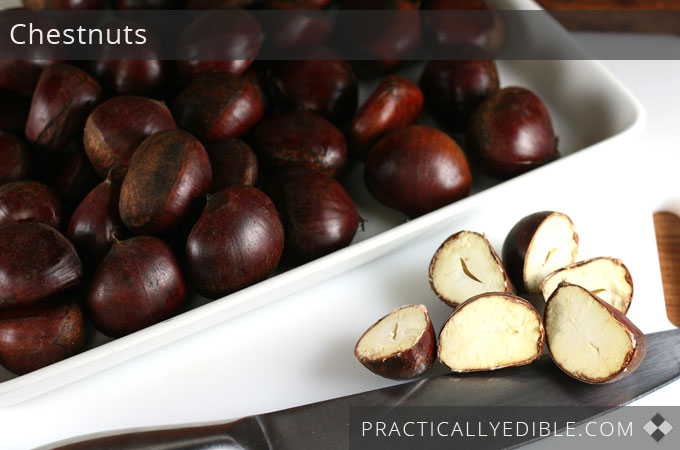 I gotta admit, one advantage of this method leaps out during this part: you see right away the bad chestnuts, so you know not to waste another second on them. 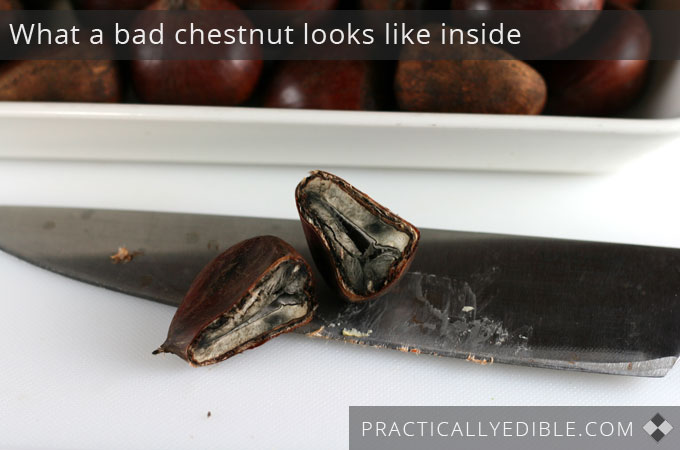 I know this is a yucky picture, but I think it’s important people know that you will get bad chestnuts and this is what they can look like.

So, I parboiled the halved chestnuts for three minutes. (In the video, on his woodstove, it shows the water taking a longer time to return to the boil after the chestnuts are added. On my super induction burner, the water never stopped boiling when I added a few handfuls of chestnuts, so I couldn’t immediately remove them — I went with three minutes as I had seen that suggested elsewhere.) I only did a few at a time, removing them with a slotted spoon, so that I’d be able to work with them hot, as everyone says forget about even trying to peel chestnuts when they are cold. 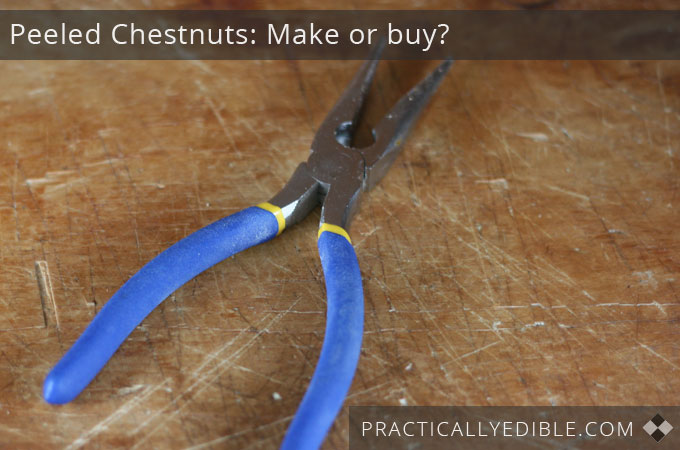 After a bit of experimenting I found a large pair of needle-nose pliers that was able to get around the chestnut, and I found out that you don’t squeeze in the middle to pop them out, as that just mashes them — instead, you squeeze at the very end to pop them out.

Except they didn’t pop out. I’d say they were reluctantly forced out, extruded out. A whole lot of inner skin came with the nutmeat, and a whole lot of nutmeat stayed behind in the shell. Man, this sucks.

Some quick Googling on the computer. Some people suggest soaking first (I’d done that.) A New York times article suggested boiling longer. Okay, so went back to the kitchen and I tried that, but I didn’t want to go so long that they all crumbled. I tried varying lengths of time. But the results were all the same, like this: 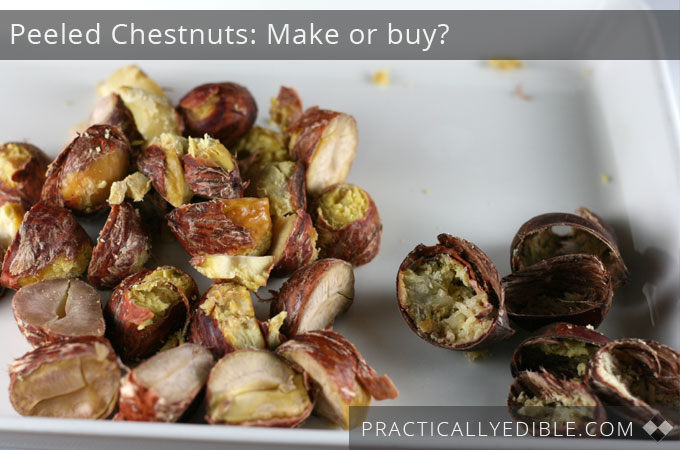 You see all that wasted nutmeat still in the shells? And all that nasty, bitter inner skin that is going to have to be painstakingly peeled off with a paring knife?

Yep. A “hate your life moment” combined with a “kick yourself” moment for being right back in this situation not even a week later. 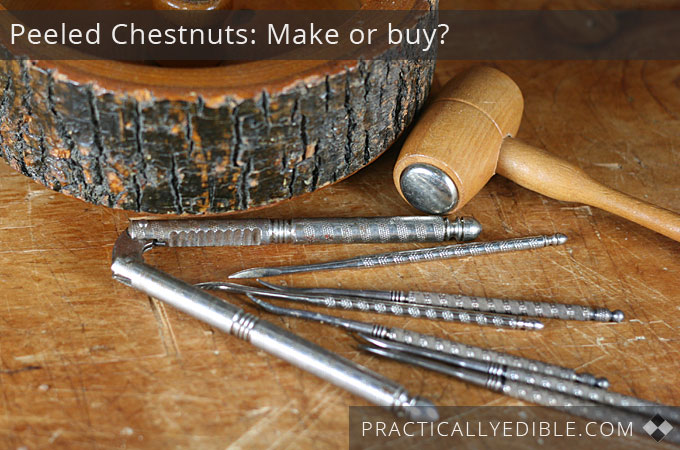 To try to dig out and salvage more of the pricey nut meat, I even resorted to some good old fashioned nut tools — ESPECIALLY the nut pickers. I spent a lot of time digging chestnut out. At first anyway. Until I had to admit that the good ship Caring had tooted its horn and left the dock. 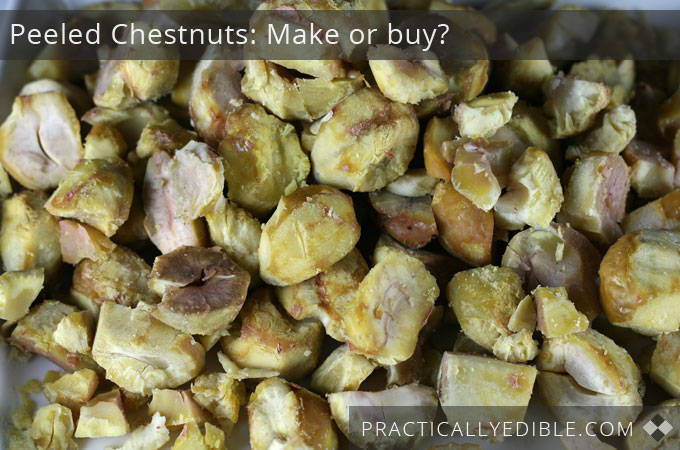 So this is the sorry mess I ended up with in the photo above, once again. It won’t win any Internet food beauty contests, that’s for sure. Maybe there’s a prize for honesty, lol?

In any event, time to weigh them to see what the bottom line result was, so that I could factor costs into my final thinking about all this. 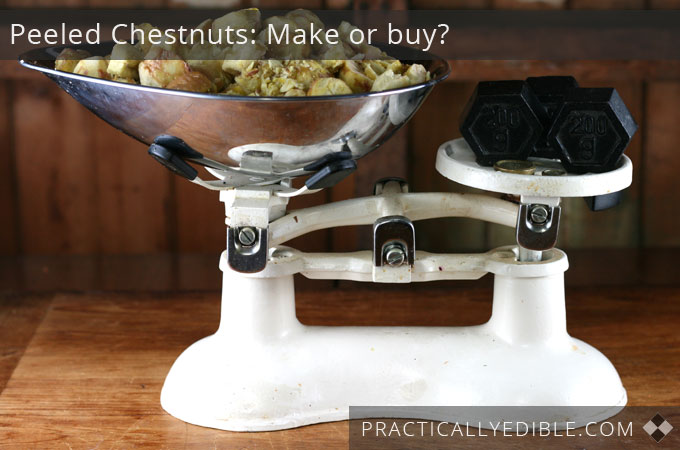 Time to haul out my old weigh scale. Hey, I know it won’t win any prizes, either, for high-tech, but it’s great on batteries, and gravity never lies, eh?

Ugh. Really not ending up with very much here at all. 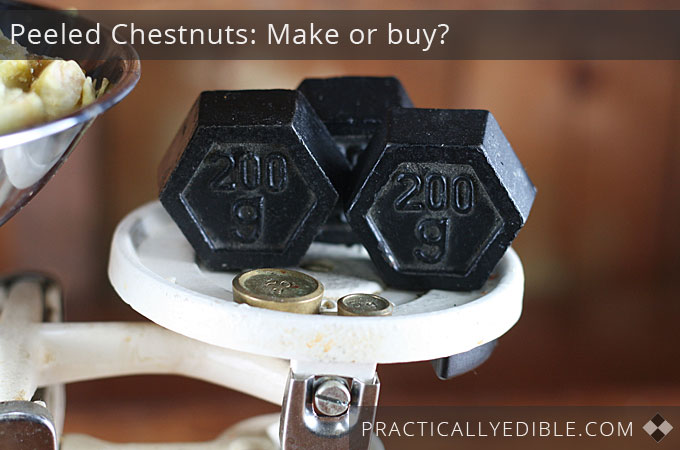 That’s 625 grams out of the 1.15 kg (22 oz out of 2.52 lbs) that I started with. So a 40% loss in product. Yeah, I know a good deal of that is inevitable as it’s shell and inner skin, but still, you can see all the nutmeat in the shell husks that I just gave up trying to save because even if I got it out, it wouldn’t be fit for the purpose I needed it for, anyway. I suppose I could have dug it out anyway and froze it for use in a turkey stuffing, but frankly I was fed up at this point.

So that was my second recent attempt at peeling chestnuts and you saw my results.

Let’s do the math now. 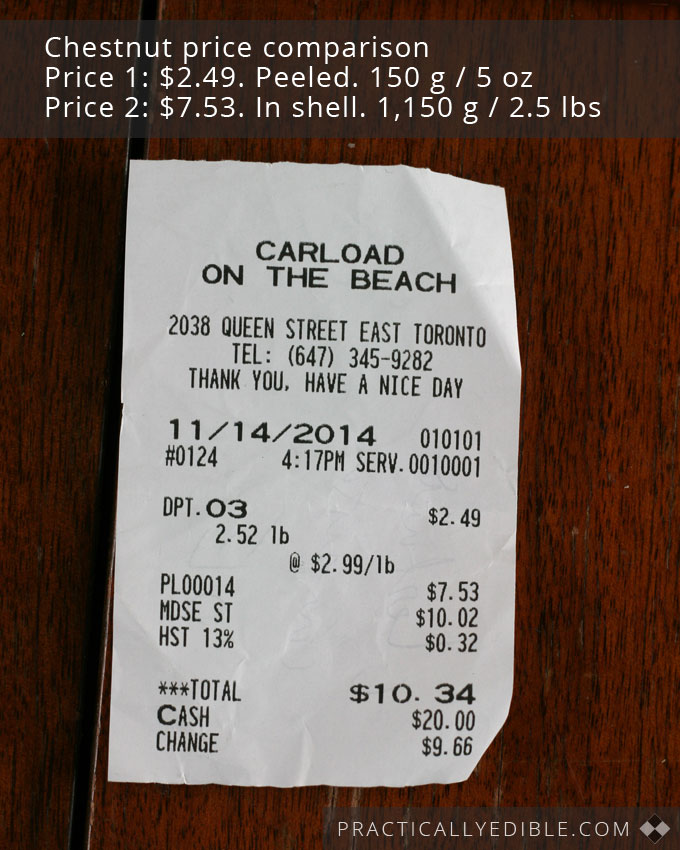 My time spent on this was 2 hours.

Do it yourself prices of peeled chestnut, at $2.99 a pound raw in shell:

My conclusions about peeled chestnuts

If someone tells me that I worked with the wrong chestnut, and that other varieties of chestnuts peel easily, I might be willing to try peeling chestnuts one last time. Until then, they are now firmly in the same thankless, “life is too short” task category as preparing artichokes and peeling mushrooms.

Even though the already-peeled chestnuts do cost a bit more, for the time savings, and the much better (more intact and better looking) chestnut that you have to work with, I will go with the already peeled from now on. Chestnuts (well, all nuts, really, these days) are a luxury item anyway, so I might as well enjoy them than resent them. And yes, I’m sorry that someone else is peeling them for me for so little extra money per hour, I do hope it isn’t actually a person and that instead it’s a machine that does it somehow.

Now, it could also just be that some people are born with the knack of peeling chestnuts — in the same way that some people (not me) are born with the knack of making a perfect boiled egg effortlessly — and some people are not. So if you’re one of the ones who peels chestnuts effortlessly, then I suggest we divvy up kitchen chores based on our skills: you peel the chestnuts, and I’ll go off to hunt for a pair of very large wine glasses so that we can discuss all this properly. 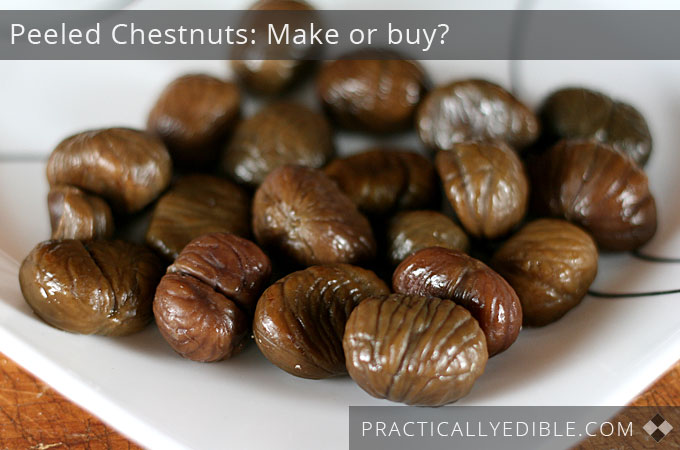