Navigation
You are here: Home / Kitchen Tools / Hunting for a new microwave 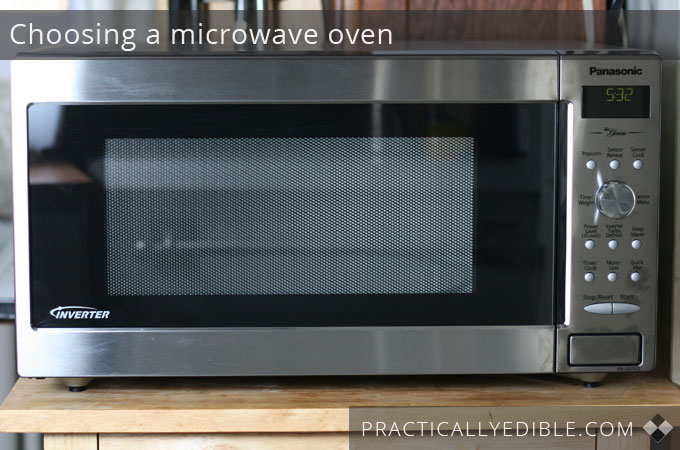 Hunting for a microwave oven

The most recent microwave oven died two weeks ago. That officially made it three microwaves that I’ve gone through.

Microwave No. (3) — yet another hand-me-down, arriving in the spring of 2013. A small, “lunch sized”, low-wattage Kenmore microwave from the mid 1990s, white but yellowed with age. It was small, and slow, but it would give me time to research and debate what microwave oven I wanted to buy.

Well, it’s the spring of 2014, and Microwave No. (3) has died two weeks ago. I guess I’m hard on microwaves. Everyone says our microwaves get used more than they ever saw a microwave get used in their life.

At any rate, with all the hand-me-downs done and gone, this gave me the chance to finally for the first time ever proactively pick out a microwave, rather than have one pick me out. So I spent a few frustrating weeks after the death of (3) researching what was new in the field of microwave ovens since the 1980s.  But the pressure was on: a microwave oven is one of the tools I use in getting meals on the table, often several times a day.

I often find it easier to approach things like this by starting with what I don’t want. My mind tends to be clearer on that.

What I DIDN’T want in a microwave:

What I DID want in a microwave:

As for price, most people these days go out and grab pretty much any microwave oven that’s under 100.00 bucks (or pounds or Euros — under 100 seems to be the bargoon line in every country);  I figured I’d need to spend a wee bit more. But, I wasn’t willing to go hundreds and hundreds and hundreds because the feedback I was reading from people who had was that the microwaves were dying after two, three years anyway, and that higher prices were no longer a guarantee of quality. So I was not gonna go up to 700.00 or even 500.00 bucks, no matter how much a machine called out my name. I told myself — somewhere from 200 to 400 bucks, all in.

What I Found That’s New in the Microwave Field

Nothing, really. They really don’t seem to have come up with much new since they added rotating turntables decades ago. Oh, there’s the odd thing they tout as new such as a “popcorn” button, but whoopee-doo, eh?

A feature I would have liked, dual-level cooking, seems to be only spottily available and not even mentioned when it is included (maybe I’m the only consumer that would care about it).

And the one killer feature that I would love to have, a microwave that has a “chill” button, to immediately chill / freeze / set things I didn’t get around to making early enough in the day…. well, that’s in the “dream on” category, I’m sure.

The Microwave I Ended Up With

I ended up compromising on three things. 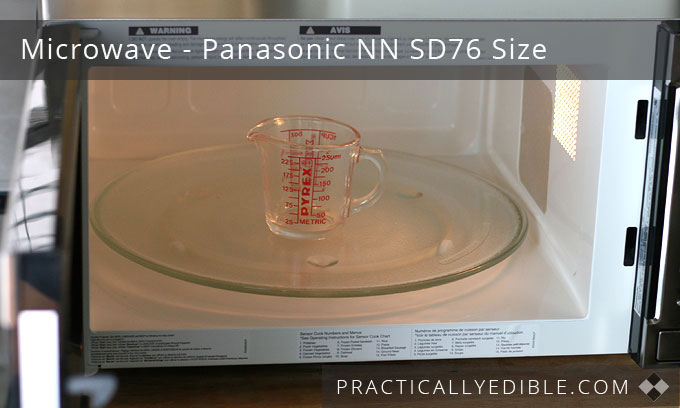 An unexpected benefit is that the microwave can hold *and rotate* a 9 x 13 (30 x 20 cm) rectangular baking pan. I hadn’t even thought to look for that feature, but I definitely will in the future now. (I learnt later that some microwaves have a button that allows you to temporarily stop the turntable from rotating to help you accommodate such various-sized dishes.) 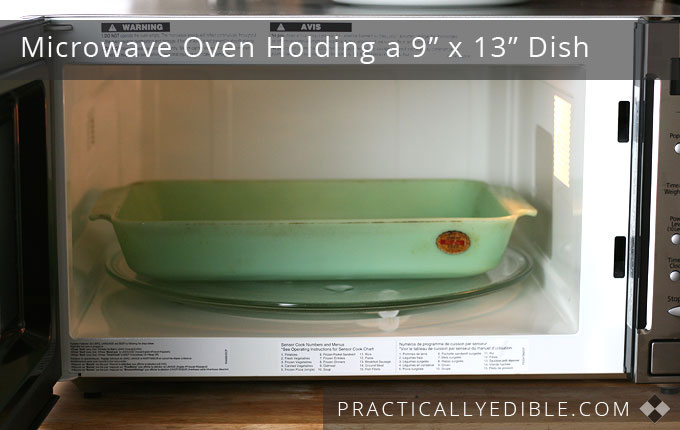 The depth of this microwave doesn’t come through in the picture, but that dish will actually rotate in there with the door closed. Granted, just — but it will.

It’s really simple to operate. I’m just basically using either the dial when I need to get fractions of a minute, or more usually, the “quick minute” button over top the start button that adds a minute of cooking time for each press.

So. Fingers crossed it lasts a few years. And onto phase two: adding the capability for two-level microwave cooking.

Update: 4 months later, end of June. We’ve found only one odd thing about this microwave, and it’s the darndest thing… if you are reheating anything in a dish, bowl, jug or cup with a handle, no matter what way you have the handle facing when you put it in and start the microwave, at the end, the handle will almost always inevitably end up pointing to the back of the microwave. Very odd.