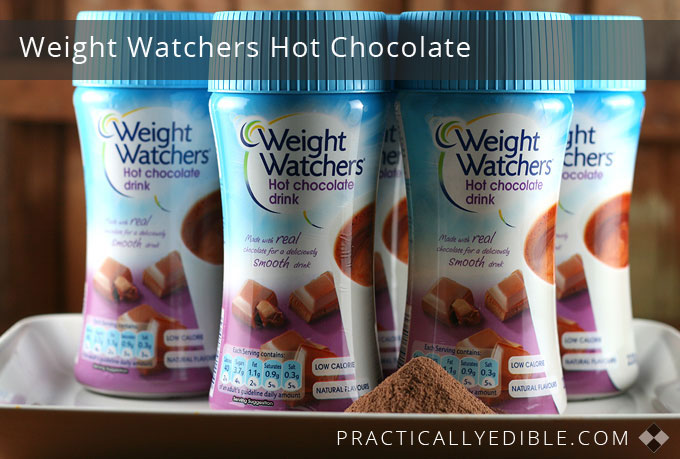 Weight Watchers ®Hot Chocolate drink is definitely one of this winter’s top finds for me.

It is probably the best instant hot chocolate drink mix I’ve tasted, ever. The combination of a rich, thick texture and dark chocolate taste makes it like drinking a melted chocolate bar. Tasting sugar rather than chocolate has always been a turn off for me with other chocolate mixes, but this has a real grown-up, deep, chocolate taste.

It’s only 1 PointsPlus® (40 calories) per mug (serving), so it’s cheap as chips in terms of Weight Watchers points. In price, not so cheap: I see it this month at £2.89 a bottle in England (at Tesco’s); in Canada I’m paying $7.99 at the English import store. But, you can drink it worry free,  it’s very good and one bottle goes a long way. 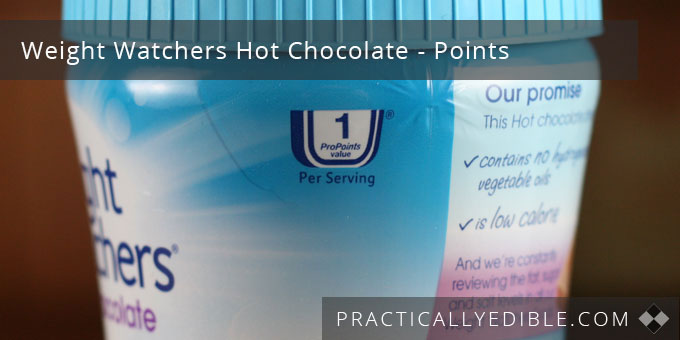 Here’s the directions from the container: “Just add 3 heaped teaspoons (11g) of Weight Watchers Instant Hot Chocolate into a cup or mug and then pour on hot water (200 ml) and stir.”1

For any North Americans wondering  if “teaspoons” means out of the cutlery drawer teaspoons, or, the smaller North American measurement teaspoons, I wondered the same, so I weighed it all out to see what 11 g came to 11 g — it did indeed equal 3 heaped (regular, cutlery drawer) teaspoons. So, you really do get a lot of hot chocolate for 1 miraculous point.

That being said, I personally even find 3 heaped teaspoons too much for just 200 ml (about 3/4 cup) of water, so for the 3 teaspoons I would usually use a much bigger mug with more boiling water, sometimes I think up to 1 1/2 cups (375 ml).  More usually though, I’ll make it with their recommended amount of water, but use just 2 teaspoons of the powder. At any rate, it’s easy to adjust both factors to your own taste.

Keep a spoon handy, because you will see a fair bit that has settled on the bottom of the mug as you drink your way toward the bottom, and just give it a stir.

But back to the taste. Truly phenomenal. They’ve knocked it out of the park on this one.

It’s relatively low in sodium (just 100 mg per serving), and suitable for vegetarians. 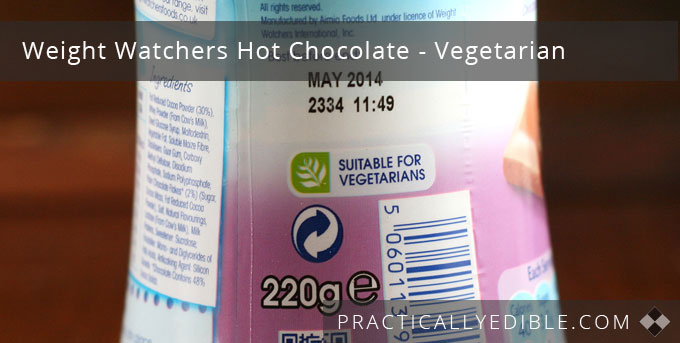 I do appreciate those who might feel that for them it’s better to make hot cocoa oneself from scratch, as it can be organic, fair-trade, healthy, nothing artificial, etc, etc, but I hope they won’t deny me a few small mid-week cheats in life, such as an instant mix on hand for the end of those days when you barely have the energy left to turn the kettle on. And, to be honest, those “from scratch with milk” cocoa or chocolate drink recipes usually come to 5 or so ww points, and frankly, there are loads of evenings when at the end I just don’t have the points left to spare, and if I did, I’d rather have this PLUS something else with it. 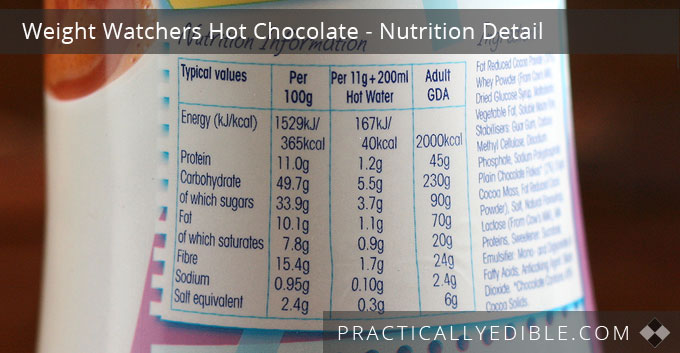 It’s made for Weight Watchers by the Amia company. They also sell it in mint flavour, and caramel flavour [2. See a review of these on the Weight Loss Bitch blog. ] And just this month (January 2014) the company has introduced three additional flavours, calling them the Weight Watchers Hot Chocolate cake range of flavoured hot chocolates: Jaffa Cake (Orange), Cappuccino Cream Cake, and Chocolate Cherry Brownie. 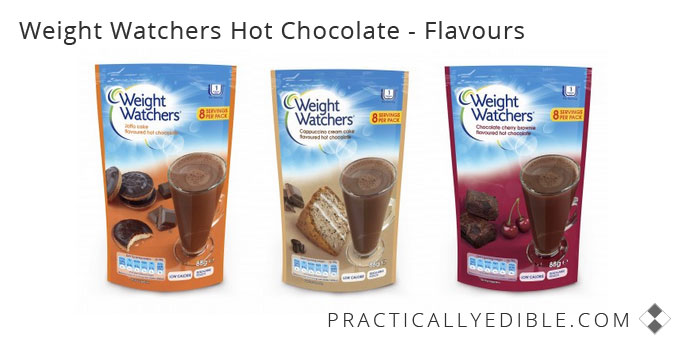 As a guy, I have to say I’m not sure any of those new sweeter flavours would appeal to me — though who knows, I’ve always loved Jaffa Cakes. But long may they keep on making the plain version!

If you manage to find it, and try it, let me know what you think. I hope I won’t have steered you too far wrong!